Since 2016, there has been considerable attention paid to the accumulation of microplastics in the world’s oceans, as well as in fresh water and water treatment environments. In fact, since 2016, there have been more than six million mentions of polyester, microfibers, and pollution across English-language media.

Much of the focus has been on plastic straws, shopping bags, and packaging materials that find their way into lakes, rivers and oceans through various means. However, there is growing interest in understanding how textile fibers might be contributing to the overall total.

BACKGROUND
Cotton Incorporated is primarily a research organization. As such, we were intrigued when Patagonia and The Bren School published the results of their study on synthetic fleece microfiber in 2017. This marked an undeniable connection to textiles as a contributor to the accumulation of microplastics in the world’s water bodies.

We felt confident that cotton textiles likely shed microfibers in a typical laundry load, just like the synthetics. What we did not know was whether these cotton microfibers were accumulating and persisting in aquatic environments to the same degree as synthetics like polyester.
Research conducted by Cornell University in 2010 confirmed that cotton textiles biodegrade more readily on land, as compared to polyester. But no research had been done on how aquatic environments might affect cotton textile degradation.

Although the Cornell research demonstrated faster degradation rates for cotton than polyester in a land-based disposal scenario, we knew we could not assume that the rates would be comparable across three different water environments. We decided to join forces with our Australian cotton counterparts at the Cotton Research & Development Corporation to fund independent research on the topic. North Carolina State University was identified as having both the capability and expertise to conduct the study.

The two-year study set out to determine the degradation rates of cotton, polyester, cotton/polyester blends, and rayon in three distinct aquatic environments: wastewater treatment plants, fresh water, and sea water. The testing adhered to established test methodologies, which differ for each environment.

Microfibers of four the fiber types, plus a control of microcrystalline cellulose, were introduced into samples (inocula) from a local wastewater plant, a freshwater lake, and the Atlantic Ocean off the North Carolina coast.

Here is what was observed:
In the wastewater treatment environment, the cellulose control achieved 84% degradation in 250 days. As per the standardized test method for this environment, the 84% milestone marked the completion of the test. The comparative degradation rates over the 250 days are graphed below: 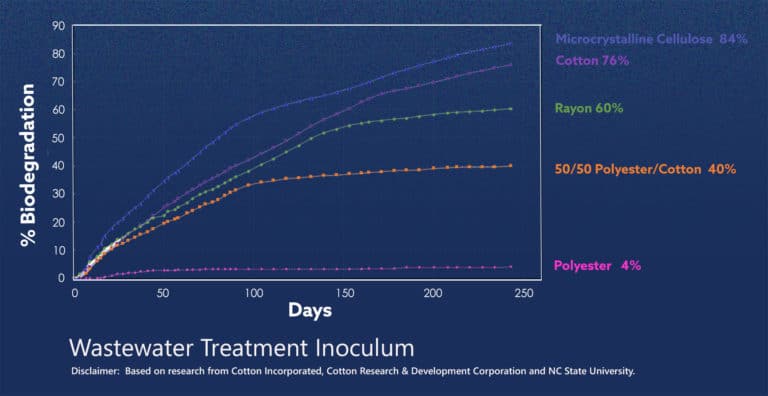 The fresh water and salt water tests yielded comparable results after a period of one month: 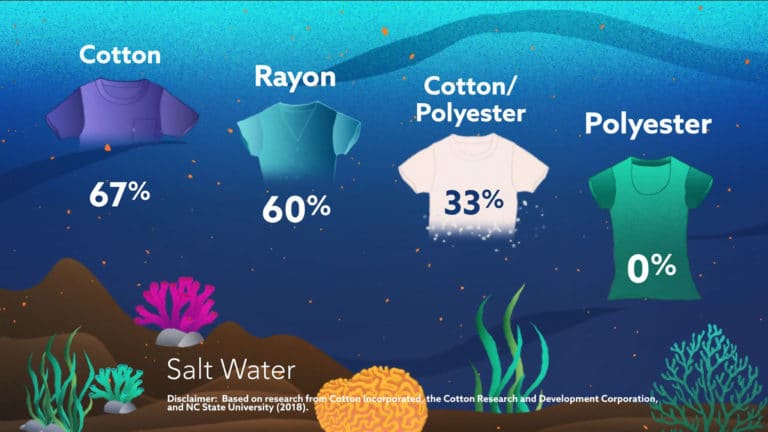 New study finds that cotton, even when treated with commonly used textile finishes, biodegrades in aquatic conditions – helping the reduce the amount of microplastic fibers found in our water How Cotton Can Fit Into a Sustainable Future Cotton and Water: Better Management of An Increasingly Scarce Resource